As a Branch of the Monaro Acclimatisation Society, the CTAA is responsible for stocking rainbow and brown trout fry and fingerlings in the Badja River, Numeralla River, Murrumbidgee River, McLaughlin River, Peppers Creek, Rock Flat Creek and Wullwye Creek.

Our financial year starts on 1 October, when annual contributions for membership fall due. They are expected to be paid before the following 1st January. New members joining after 30 June each year remain financial until 30 September of the following year. The joining fee is $20, plus an annual subscription fee of $30 for adults or $40 for families. Annual membership for juniors (under 18) is free.

Rod and Line, the Association’s Journal is published approximately four times a year, generally in January, April, July and October. The Journal is distributed free to members.

Bidgee Lodge is located off Mittagang Road adjacent to the picnic area on the Murrumbidgee River. The building is the major asset of the Association and the centre of all activities.

Originally a fishermen’s lodge on the Thredbo River built in 1949, it was in danger of being flooded by the rising waters of Lake Jindabyne. It was purchased by the Cooma Trout Acclimatisation Association for $700 and transported to its present site in 1967. A meeting room was added in 1970.

Bidgee Lodge today is the centre of activities for the Cooma Trout Acclimatisation Association. Regular Monaro Acclimatisation Society meetings are held there, and the lodge is sometimes used by other fishing clubs.

It is available for members and their guests to use for social events and accommodation.

The ambience and history of the Lodge are always appreciated by those who visit. 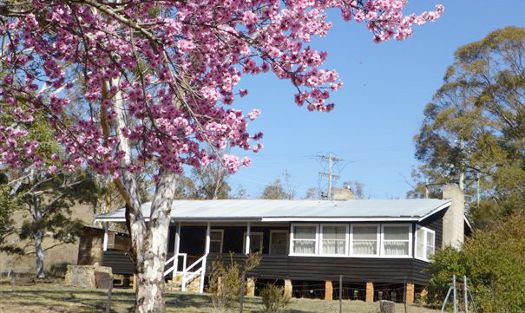