What is special about Trout?

Trout is a common name given to various fish, but is more correctly reserved for certain members of the Salmonid family of fish. There are many species of trout, but the most common in Australia are Brown Trout and Rainbow Trout.

Trout are a freshwater fish of the northern hemisphere, but because of their great value as sporting fish they have been introduced to all of the continents of the Southern Hemisphere for recreational fishing. The acclimatisation of trout in the Snowy Mountains and Monaro gave birth to the Monaro Acclimatisation Society. You can read about the history of the society here.

Trout feed on all sorts of small animals and fish that they find in the rivers and lakes, so they may be caught using normal fishing tackle and baits, both natural and artificial. However, it is their habit of rising to the water surface to eat floating insects that especially endears them to anglers. As most of the insects they eat are very small, the specialised tackle and techniques of fly fishing were developed to enable them to be caught. The appeal of fishing is as varied as the anglers themselves, but many trout anglers discover that it is most satisfying to capture trout with an artificial fly.

While they do make a nice meal, it is probable that trout fishing has always been primarily a recreation. Fly fishing was first described by a Roman scholar in the 2nd Century, and until the 20th Century was an activity reserved mainly for gentlemen of leisure. In more recent times, rising living standards and more leisure time for everyone has seen trout fishing become a popular recreation.

Trout fishers today owe a debt of gratitude not only to the early pioneers but to the dedicated acclimatisers who followed. The Monaro Acclimatisation Society, through its large network of branches and volunteers, continues to maintain the trout fisheries of the Snowy Monaro region in New South Wales.

Testament of a Fisherman

I fish because I love to; because I love the environs where trout are found, which are invariably beautiful, and hate the environs where crowds of people are found, which are invariably ugly; because of all the television commercials, cocktail parties, and assorted social posturing I thus escape; because, in a world where most men seem to spend their lives doing things they hate, my fishing is at once an endless source of delight and an act of small rebellion; because trout do not lie or cheat and cannot be bought or bribed or impressed by power, but respond only to quietude and humility and endless patience; because I suspect that men are going along this way for the last time, and I for one don't want to waste the trip; because mercifully there are no telephones on trout waters; because only in the woods can I find solitude without loneliness; because bourbon out of an old tin cup always tastes better out there; because maybe one day I will catch a mermaid; and, finally, not because I regard fishing as being so terribly important but because I suspect that so many of the other concerns of men are equally unimportant - and not nearly so much fun. 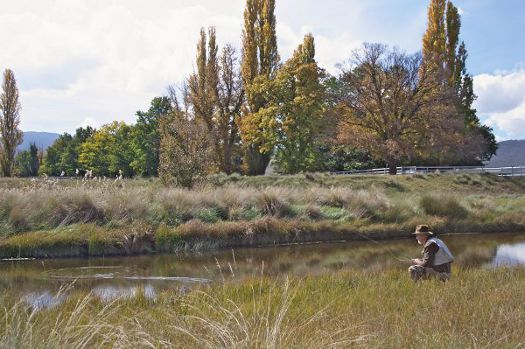 Casting a fly to a rising trout.